From darkness to the colors of abstractionism, passing through the Baroque: Here is the art of Fabio Capitanio

Fabio Capitanio’s artistic drive made its way through difficult life circumstances and limited material time at his disposal; but in the end it prevailed. Canvases painted with vibrant enamels and marble sculptures are now the focus of the artist’s life, after a long period of working in his father’s business. “I’m practicing daily and looking for new solutions,” Capitanio says. “In the last period I’m working on a series of “luminous” works, spreading enamels on glass or plexiglass and obtaining, in this way effects similar to those of the windows of Gothic churches.” Fabio Capitanio adores the Baroque and his next goal is to create, within the environments, a mixture between this ancient style and its contemporary abstract trait. “I am madly in love with Rome and Caravaggio,” adds the artist. Because of the closures due to the pandemic, Capitanio had more time for his art and began to focus on sculpture. “I started with Botticino marble, which is typical of the Brescia area, where I was born and still live,” he says. “But it’s a very hard and difficult material to work with, even if the results are interesting; now I’ve switched to Carrara marble, which is more malleable.” Fabio Capitanio’s sculptures are small in size; working with larger blocks of marble would involve the use of machinery that he does not currently own. The artist proceeds with a sketch that is not too detailed (“I’ve never had patience in drawing,” he says), but the result is of a surprising truthfulness and power. Fabio learned patience and love for manual work in the nineties, during a particularly difficult period of his life, in which he had to start a seven-year detoxification process from drugs. To free himself from addiction, at the age of twenty-seven, Capitanio entered a recovery community. 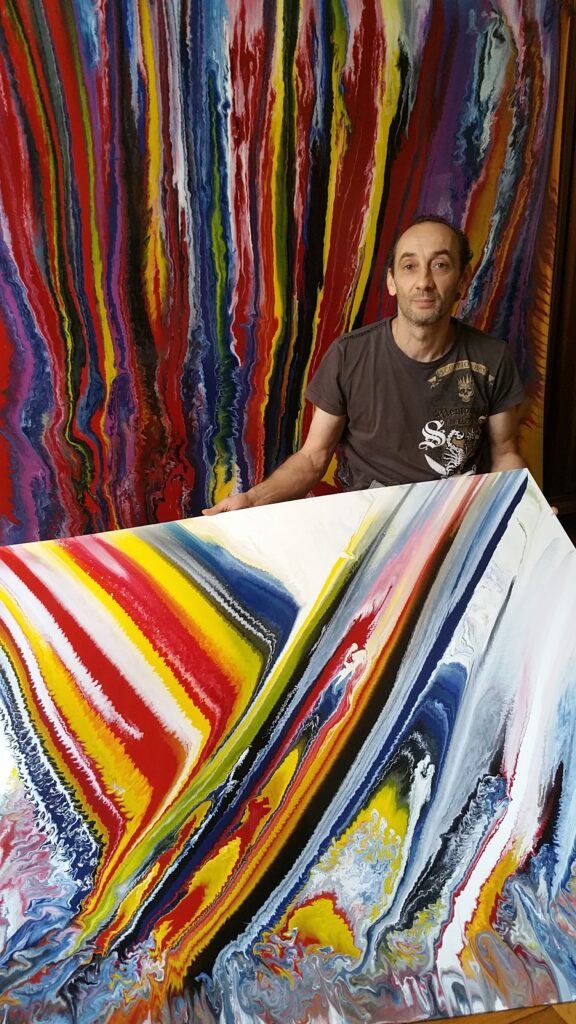 The artist recounts: “They used a method that put you in contact with reality, I learned to know myself and to relate to others. We often talked about ourselves in a group and spoke without being offended by the comments of others, a way of interacting that, unfortunately, I no longer found once I left the community. In addition to this, I learned to do a lot of manual labor, even some that were not in my wheelhouse. Among those I loved was cabinet making and wood inlay.” Fabio Capitanio’s passion and patience for woodworking led him to painting. “After seven years in the community, I left and resumed my job as a site surveyor with my father’s company. But I felt it wasn’t my path; moreover, I missed contact with those manual trades I had learned during my recovery journey.” So, while recovering from an illness, in 2009, Fabio picked up a box of his sister’s children’s tempera and began painting for the first time. From that moment on, Capitanio experimented with different techniques until he fell in love with enamels: “I discovered how enamels react to each other and I started to blend the various colors with different components. Enamels are vibrant and bright,” explains the artist.

After his experience in the recovery community, Fabio Capitanio found himself in a very different world; he says, “All the life values I had learned clashed with the real world. This made me reflect, in a moment of negativity I became introverted and accumulated different tensions, which found an outlet through painting.” Not surprisingly, his first cycle of paintings is called “Strange Visions” and includes canvases with dark hues. But then comes the second series, “Ariosi”, with brighter colors and an atmosphere of optimism, and then the cycle “Realtà virtuali” and so on. Capitanio explains: “These are momentary and unrepeatable inspirations. If I had to repropose the cycles already painted, I wouldn’t succeed”. Fabio Capitanio began to exhibit in 2011 in a collective exhibition in Piacenza, where he was noticed by an art critic. The world of exhibitions, which sometimes disappointed him (“I was supposed to exhibit at the Venice Art Biennial, but then everything jumped because of a controversy,” he says), does not excite him. Instead, in 2017, he started the Chromomorphism movement, an artistic manifesto based on a kind of process art, where action is combined with the movement of color.

Letizia Riccio is an Italian journalist. Besides The Art Insider, she writes about culture, art, Tv&Radio, interior design, for the magazines ArtsLife, Artribune, Ville&Casali, Prisma. She contributed to many Italian newspapers, like La Repubblica, Il Mattino, L’Unione Sarda, and to the press office of the Italian Ministry of Justice. She was a correspondent for L’Agenzia di Viaggi magazine, all over the world.

Annie Chen Ziyao: The Diversity of Her Works Is What Makes Her Unique

Artist Nasr on expressing “Less is more” via Art & Illustrations