Two popular murals of street artist Banksy were defaced by unknown elements over the weakened, according to a report by New York Post.

The two murals, The Gray Ghost and Umbrella Girl, have been in New Orleans since 2008. The Gray Ghost features a man covering flowers with grey paint, located on the side of a building at Clio and Carondelet Streets. The other one, Umbrella Girl, features a young girl putting her hand out of the safety of her umbrella. Considered to be a reference to Hurricane Katrina, the mural is located at Rampart Street. 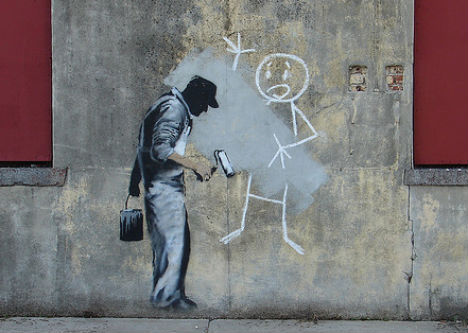 Both murals were defaced with graffiti in red paint, carrying the words “Team Robbo” and “King Robbo”. This seems to be a reference to the British street artist King Robbo, who died in 2014. King Robbo had a well-publicized feud with Banksy in the last decade. The feud began in 2009 when Banksy was alleged to have defaced one of Robbo’s works from 1985.

However, no one has come forward to claim responsibility for the act so far. The motives are not clear either; some believe it to a work of Robbo fans taking revenge against Banksy. According to Carlos Fundora, a street artist in New Orleans, it could be someone simply trying to make a name for himself by defacing Banksy. Fundora was the one who found the defaced murals first, cleaned off the majority of the paint and informed the authorities. According to him, he did it not for Banksy but for the people of New Orleans who have come to find comfort in those murals.

Marie Blanchard: The Celebrity Fitness diva of many talents

Find out which artists were honored in Queen Elizabeth’s 2021 Honor List.